Until Dawn Wiki
Register
Don't have an account?
Sign In
Advertisement
in: Characters in The Inpatient, Characters, Stubs,
and 4 more

Clothes as a patient and as a doctor

Ballpoint pen in one of the pockets of the doctor's coat

Transformation of Wendigo or devoured by the player

Gordon Bennet is a doctor masquerading as a patient in the Blackwood Sanatorium during the events of The Inpatient. He is voiced by Michael Weaver and modelled on Dawid Kocieda.

General information: Gordon has a complexion of white skin. His hair is short and dark brown. His eyes, like his hair, are the same color tone.

As a patient: Gordon was a patient infiltrated during the events of The Inpatient, in order to observe the progress and changes of the patient.

As a doctor: Gordon was really one of the doctors at Blackwood Sanatorium.

In this part of the game, Gordon seems more macabre, with a careless and frightening appearance. His skin is pale, his eyelids completely dark and, finally, his eyes turn white and milky. That change is due to his early transformation into a Wendigo.

Gordon comes across as a friendly man with a sensitive side and a somewhat bitter attitude. He does know about the Miners secret and about the experiments. He seems suspicious about The Patient.

He is willing to sacrifice himself to save others. He seems to have had some respect towards Jefferson Bragg but later he blames him for the incident. He is kind towards The Patient asking him if he is alright. He doesn't trust Victoria and gets angry quickly. He also regrets when he hits The Patient and pushes Ted then asks forgiveness from them. According to him he cares for his fellow co-workers and loves to help the patients. He tells The Patient his dream was to be on the mountain and help people around. He doesn't get scared easily and acts though. He seems to know about The Patient telling him that he's a reporter. He was ordered by Jefferson Bragg to monitor The Patient’s behavior and knowing his past memories. He gets worried after finding out that he is going to turn into a Wendigo.

Gordon is seen in the beginning in the patient interview room with Jefferson bragg. He is standing behind and noting down the patient's progress and it is dark so he can't be seen properly then after the interview. Jefferson Bragg convinces him to disguise himself like a patient and monitored the patient's progress. The Patient meets Gordon after two days. The next day Victoria comes and she greets The Patient and Gordon but Gordon dosen't replies to Victoria. 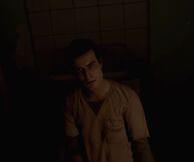 Gordon slowly turning into a wendigo.

Gordon attacking the player after the cable car left.

Gordon angry at the player.

Gordon coming to talk to the player.

Gordon telling the player to get on the cable car. 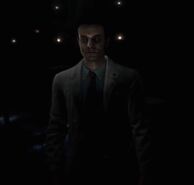