Until Dawn Wiki
Register
Don't have an account?
Sign In
Advertisement
in: Female, Characters, Playable Characters,
and 4 more
English

Succumbed to injuries after

falling off a cliff

Beth Washington is a false protagonist and playable character in Until Dawn. Beth was the youngest of the Washington children - the sister of Josh and twin sister of Hannah Washington. After Hannah fell victim to a prank, Beth followed her into the woods where the twins ultimately ended up missing.

She is portrayed by actress Ella Lentini.

Beth has short, dark brown hair that goes below her chin with bangs underneath her white beanie. She has a light caramel complexion. She wears a half-sleeved grey sweater, darker grey yoga pants, and cream colored boots during the prologue. She also wears a watch on her wrist (which can be found very late in the game) and a fuchsia winter coat (which she gives to her sister).

According to her "Missing Person" poster, she weighs 110 pounds and her height is 172 centimeters (5'8). Like most of her family, she has dark brown eyes.

In the previous version of the game, for Playstation 3, Beth's appearance (like Hannah's) was quite different, she had short brown hair combed and her facial features were also different, however her clothes were almost the same as in the version end of the game, except that her coat was blue instead of pink and she seemed to wear a white shirt underneath.

Beth is a caring and protective person. After the prank on Hannah, she was angry at Mike, Emily, Jessica, Matt and Ashley and called them "jerks", after which she ran out in the cold woods by herself to look for Hannah.

When she found Hannah, she immediately gave her her coat, despite wearing yoga pants when Hannah was wearing jeans. When Hannah tripped and fell while running away from what was later revealed to be a Wendigo, Beth immediately turned back to help her get up and run again, putting herself at risk. Her highest traits are honest and charitable, while her lowest are funny and romantic.

She often displays impulsiveness, as seen when she ran out in the cold weather to look for Hannah. She is not as naive as her sister and can sometimes even be seen as cautious.

Beth is the third child of the Washington family, being the younger twin sister to Hannah and the little sister of Josh.

Beth is a caring and protective individual, appearing to be sophisticated and cautious, unlike her more naive sister.

Beth, along with Hannah, disappeared in February 2014. The police searched high and wide, but despite their best efforts, the sisters are still missing, presumed dead.

Beth is the first character seen in the game, shown looking outside the lodge's window. She then catches a glimpse of The Stranger outside and asks Josh (who is passed out after drinking too much alcohol) if he noticed the figure. Beth then roams around the room, eventually finding the note from Mike inviting Hannah up to the room for the prank. She asks herself what her 'naive sister' got herself into now.

Beth then sees someone (later revealed to be Hannah) outside from the window. Confused, Beth either has the option to wake Josh or find the others. If she tries to wake Josh, she is unable to rouse him. She quickly puts on a coat, follows the other out to the front of the lodge and hears Sam calling after Hannah.

Beth joins them and asks everyone what happened. The group explains they were pranking Hannah, but dismiss it as just "messing around", believing Hannah overreacted. Beth is unimpressed; after calling them jerks, she sprints into the woods to look for Hannah. Soon, she hears a noise and sees footprints on the ground, both leading to different directions. She can choose either follow the footprints or the noise, pulling out her phone and using the flashlight to see better. After walking more, she sees a death totem on the ground, depicting herself and Hannah dying after falling from a great height. She also hears strange noises and sees apparently random bursts of fire in the distance. Beth finally catches Hannah sitting on the ground, crying. Beth is relieved, offers Hannah her coat, and helps her up. Suddenly, they hear a noise (later revealed to be the Makkapitew), look back and start running from it. As they run to a bridge, Hannah trips and falls. Beth hurriedly helps her up. By doing so, her phone falls from her coat pocket and into one of the slits in the bridge. Hearing the creature close in on them makes them slowly walk backward to the edge of the cliff. Hannah loses her footing and falls over the edge, dragging Beth with her. However, Beth manages to desperately hang onto a protruding branch with her free hand while trying to support Hannah with the other.

After a large flame emerges from above, a strange man (The Stranger) reaches out for Beth to grab his hand. Here, Beth has the option to either grab his hand and let go of Hannah, let go of the ledge and hope for survival, or to do nothing. Regardless of the player's choice, Beth falls from the cliff and into the mines below, tumbling and sustaining many injuries along the way, most notably a direct hit to her spine by a rock, instantly killing her.

Ashley, Chris, and Josh find an Ouija board and attempt to contact a spirit for fun. However, the spirit they 'contact' asks for help. Chris, feeling skeptical about the board, asks Ashley about its identity, stating that they can't help if they don't know who it is. Ashley obeys Chris's advice and asks the spirit who they are, to which it responds with 'sister'. The atmosphere suddenly tenses up as all three are now scared that they may be talking to Hannah or Beth. Josh, distressed by the answer, wants to know which sister it is. Here, Ashley has the choice to say if it's Hannah or Beth they're speaking to. Regardless, the counter moves to 'yes'. 'Beth' then directs Ashley and Chris to the library as Josh leaves, accusing Chris and Ashley of this whole ordeal in order for him to have some closure and says that they're "full of it".

Matt and Emily may find Beth's phone under some wooden boards on a bridge, where Beth and Hannah ran through one year ago. The couple becomes extremely confused, stating that they thought the police had already searched the whole area.

As Emily wanders through the mines, she can find Beth's rotten, decapitated head sitting atop a pile of rocks. She also finds a cross with Beth's name on it and a date on it: February 2nd, 2014, the day the prank took place. Based on the rough carvings on the cavern walls and an assortment of Hannah's belongings, Emily deduces that Hannah survived the fall but Beth was instantly killed.

Beth, along with Hannah, appears to Josh during his hallucination in the mines. They are shown to be slightly cracked and dead in appearance. In the hallucination, Beth blames Josh for her death, claiming he wanted her to die and that he did nothing to save her and her sister. This is a depiction of Josh's own mind and feelings tormenting him. They disappear for a few seconds before emerging from intestines, now bloodied. After repeating the same sentence once again, Josh demands them to leave him alone. Now having terrified Josh to no end, they disappear only for a Wendigo to show up through the cavern wall and screech at Josh before the scene cuts to Sam and Mike.

While they search the mines for Josh, Sam can find Beth's watch in a dug-up grave. Shortly after, she can find Hannah's diary, which confirms that Beth died immediately a few seconds before hitting the cavern floor. It also describes how Hannah buried her corpse, but eventually succumbed to her hunger and regretfully dug up her body to eat her flesh for sustenance, unaware of the fact that one of the Wendigo spirits had begun to possess her.

Emily may mention Beth and her death in the police interview. She will only mention Beth if the player was able to find Beth's head while wandering Emily around the mines, and Matt, Jessica, Sam and Mike died before dawn. She will tell the interviewer that she saw Beth's head in the mines. Sam also indirectly mentions Beth when talking about Josh, when explaining how she tried to support him "after his sisters disappeared". 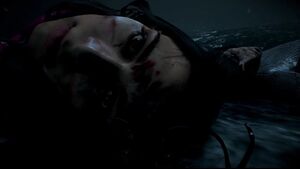 After Beth and Hannah fall from the ledge while backing away from a Wendigo, Beth grabs onto a branch. The Stranger reaches out to Beth, who then has the option to either drop Hannah and attempt to grab the Stranger's hand, let go of the branch altogether, or do nothing. Regardless of whether she lets go of the branch and she and Hannah fall down together, or if she drops Hannah and tries to take the Stranger's hand and then falls, Beth dies from injuries sustained during the fall, most notably a very severe-looking injury to her spine after she hits a rock.

Beth was Hannah's twin sister. Beth ran after Hannah from the lodge in an attempt to find her. She was very worried about her and truly cares for her well-being. Looking back on the Twins' Clues and her status, she valued Hannah very highly. Beth does have the option of dropping Hannah whilst they are hanging off a cliff edge to save herself, though if she chooses this option, she will apologize and appear distressed.

Beth and Josh have a positive relationship. She thought it was quite funny when Josh had passed out after drinking, saying, "Once again brother, you've outdone us all." Beth also appears to trust him enough to ask for his assistance.

Not much is known about Beth and Ashley's relationship, but it can be assumed they don't get along, as Ashley has one of the lowest relationship status with Beth. She is angry with Ashley for participating in the prank and calls her a jerk. Later, Ashley can express remorse over the prank and disappearances of Beth and her twin.

Beth and Chris have no interaction throughout the game. Their relationship level is high, but below Hannah, Josh, Sam, and Jess. Him being her brother's best friend, it can be assumed they were at least amicable.

Beth and Jessica have a relatively high relationship at the beginning of the game; she doesn't seem to like her as much as Sam but likes her more than the rest of Josh's friends. However, Beth will still yell at Jessica, calling her a jerk for pranking Hannah. Jessica can be seen on a photo with Beth, Hannah, and Emily in Josh's basement.

Beth calls Matt a jerk for upsetting her sister. Their relationship is not especially high, about the same as her relationship level with Mike.

Not much is known about their relationship, though it is one of her lower relationship status. The only discussion they share is when Mike tries to defend his actions. Beth calls Mike a jerk before she runs into the woods to find Hannah. Mike can later feel remorse over the prank, due to it resulting in Beth and Hannah disappearing.

Beth and Sam were reasonably close, possibly due to Sam being Hannah's best friend. Beth's highest non-familial relationship is with Sam.

Beth and Hannah can appear in one of the end of the terrifying story based on the 50s, The Inpatient. They will meet in the frozen forest, fleeing the Makkapitew (in this case, us) and approaching the edge of their deaths.