Until Dawn Wiki
Register
Don't have an account?
Sign In
Advertisement
in: Characters in The Inpatient, Characters, Stubs,
and 4 more

Ballpoint pen in one of the pockets of her robe as a doctor.

Anna Bennet is a doctor masquerading as a patient in the Blackwood Sanatorium during the events of The Inpatient. She was voiced by Erika Walter and modelled on Eleni Miariti.

General information: Anna is white-skinned. Her hair is long, dark brown and is tied up in a bun on the right side of her head. Her eyes appear to be around the same color as her hair.

As a patient: Anna was sent to monitor the patient by masquerading as a patient during the events of The Inpatient, in order to observe their progress and changes.

She wore a blouse with light brown buttons and short sleeves at first, but also later wore the patient's uniform, a dark brown V-neck shirt with the word "Patient" on the left chest as an indicator, and similarly colored dark brown pants. She did not wear any shoes or socks, most likely because they are not part of the patient's uniform. As the days passed, her hair became more messy, with her bun starting to look like it was falling apart and her untied hair being strewn about loosely. As opposed to her doctor outfit, she did not need to care about being tidy as a patient, and presumably did not do so to fit the illusion better.

As a doctor: Anna was really one of the Blackwood Sanatorium doctors.

Her untidy appearance as a patient (which she presumably pretended not to care about to fit the illusion of a patient better) will change into a more orderly one as a doctor. Anna wears her hair the same way, but now neatly and with a light blue ribbon tying it together. She wears a white doctor's coat with several accessories and a high-necked shirt the same color as the ribbon. She wears pants the same dark brown color and heels that color as well.

In this part of the game, Anna appears more frightening and inhuman, as she is now in the early stages of transforming into a Wendigo. Her skin becomes pale, her eyelids completely dark and, finally, her eyes turn white and milky.

Anna comes across as a friendly and kind woman with a sensitive side and a somewhat bitter attitude. She is willing to sacrifice herself to save others. She seems to had some respect towards Jefferson Bragg but later she blames him for the incident. She is kind towards The Patient asking her if she is alright. She doesn't trust Victoria and gets angry quickly. She also regrets when she hits The Patient and pushes Ted then asks forgiveness from them. According to her she cares for her fellow co-workers and loves to help the patients. She does seems to be religious. She tells The Patient her dream was to be on the mountain and help people around. She does get scared easily but acts though. She seems to know about The Patient telling her that she's a reporter. She was ordered by Jefferson Bragg to monitor The Patient’s behavior and knowing her past memories. She gets worried after finding out that she is going to turn into a Wendigo.

During her change into a Wendigo, shes becomes more macabre, with a frightening aspect, and starts to care less about things and nonchalantly ignore problems (including the fact that she is turning into a Wendigo itself). This change is due to the fact that Wendigos have much more basic thinking capabilities and do not care much about anything, given that their only goal is to devour others. When she is finally about to turn, her voice becomes unrecognizable and monstrous, and begins to speak through the mind of a Wendigo to the patient, no longer caring about the patient themselves but instead being compelled to attack and devour them. 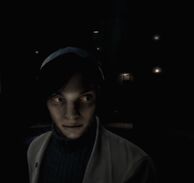 Anna slowly turning into a Wendigo.

Anna talking to the player.